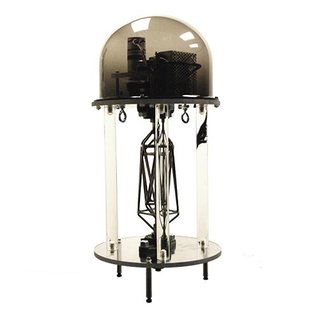 Biowave DI 9200 Mini. The new generation Biowave models emit subsonic harmonic waves that resonate with plant frequencies allowing the stomata of plants to dilate. Lab, farm and hydroponic tests showed that the average yield is increased by as much as 20%. The test results have never been lower than a yield increase of 12%. Brix tests conducted by Silliker laboratories have shown an increase in Brix from 15 to 24% for tomatoes and other vegetables. A higher Brix value means better and healthier products. Biowave technology is patented in 160 countries. Biowave ofers two products in this range. One runs on solar power and can be used outdoor. The other Biowave is especially for glasshouse and hydroponics facilities (indoor). All machines are made of stainless steel and come with one year warranty. Both models are manufactured and assembled in the United States.

It is plug and play - just plug into any wall socket. One Biowave mini will cover up to 100m2. The mini will run either on 110V or 240V. It draws only 20 watts when running. Biowave offes a one year comprehensive warranty on parts and labor. Waves are stopped by dense walls, so they are contained in the growing area.

Add your review
0 stars based on 0 reviews
Biowave (2)